Have you ever woven a 110 yard warp?  Neither have we.  For our 40th Anniversary we decided to challenge ourselves and our products a little.  Join us as we experience the highs and lows that come with taking on a project of this magnitude!


Early last month we received our boxes of yarn from Shuttles and Needles in India.  The 10/2 mercerized cotton was soft and shined in the sun.  The colors were bright and vivid.  Right away we shipped some to Jannie Taylor so she could whip up some samples on her loom, as we wanted to see how the structure and sett would work out in real life.

Once sampling was complete, it was time to get to work on the actual warp! We had the pleasure of hosting Jannie Taylor and Melody Ruth earlier this month, when they came to measure and beam our 110 yard towel warp.  The 10/2 mercerised cotton we had to work with came in 200g cones.  To facilitate speedy warping via cone racks, most of the 200g cones were split in half so there'd be enough for the pattern's requirements. Empty cones and pirns were used to hold the yarn, and our Electronic Bobbin Winder with Auto-Tensioner and Yardage Counter were used to measure and wind.

Once the cones and pirns were ready, a track and mount system, cone racks and a tension box were used.  Due to the high sett, one and a half cone racks were used to accommodate all of the yarn needed for the 2" sections.

Winding the warp on went surprisingly quickly, thanks in part to the revolution counter Jannie and Melody used (more info below). Most sections took about 15 minutes to wind-on!


Overall, the beaming process went relatively smoothly aside from one hiccup (the final section got a little wily and jumped the hoop a few times, so it had to be re-wound).


We are incredibly grateful to Shuttles and Needles for supplying the superb yarn and to Jannie Taylor and Melody Ruth for their time and expertise.  In our next project update, we'll look at how the warp was threaded and how testing goes on the IDL, as we get closer to 110 yards of 40th Anniversary Towels.  Until then, happy weaving!

Our reworked Revolution Counters are better than ever!  Featuring a redesigned look and updated with a digital counter, these now fit on any AVL Loom with a track and mount system.  Simply bolt the revolution counter to the track and mount arm, apply the magnet to the beam's drum, turn it on and you're ready to go! Here's a link to a brief video showing one in action. 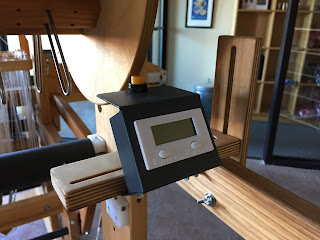