110 Yards of Towels and Patent Denters Have Returned!

It's official, the towels are done!  All 110 yards of them...  Whoa, that was a lot of fabric. Let's take a look back to where we left-off last spring, with threading the project.

Threading went fairly smoothly, with Jannie and Melody completing it in a couple of days while they were here earlier this year.  Having two people definitely made it go easier--Jannie sat inside the loom with her laptop on a stand and handed the threads through to Melody. The draft included a 16 shaft Echo & Iris inspired design, and 8 shafts of letter design.


Over the next few weeks, work progressed slowly, as time was available.  Once we got it tied-on and ready for testing, we discovered we had a missing thread mid-warp.  To remedy the issue, the track and mount was put on the rear of the loom and a Selvage Roller was attached.  We used the roller to slowly release under tension the yarn needed for the missing end.

With the help of our engineer Kim, we were finally able to get the automatic cloth advance dialed-in, and we were up and weaving!  Due to staff scheduling conflicts, weaving time was sporadic over the next couple of months, happening in small intervals as time was available.


To keep things rolling along when we did have time to run the loom, we used an Automatic Bobbin Winder to wind the pirns for the flyshuttles.  It took a little finessing to get the tension just right with our 10/2 mercerized cotton weft, but Jannie and Scott were able to get it figured out pretty quickly.  We also made use of a set of Rotary Temples to keep our edges nice and neat as weaving progressed.


It wasn't necessarily smooth sailing through the whole process, and we hit some bumps along the way.

When winding-on, there was some variation in the tension on the outer two sections.  To compensate, we had to cut-off after short runs as we started up, and there was a lot of combing the warp back from the heddles as it advanced.


Early-on, we also had a problem with the separation roller due to user errror.  Drawing from my previous weaving experience using a non-AVL loom with a locking break, I fell-back on an ill-advised, brute-force fix by continuing to crank up the warp tension to adjust the pick density and to attempt to control some unwieldy ends. The ever increasing, overzealous tension resulted in the inner rod bending on the separation roller. Once this issue was discovered, the rod was replaced and Kim showed me how to finesse the pick density by adjusting the automatic cloth advance.

We couldn't have done this without help, thank you!

We would like to again thank Shuttles & Needles for graciously providing the yarn, Eleni for letting us run the towels on her loom (which we understand has been recently named Cone Slayer), Melody for coming to help with the set up work and Jannie for setup and finishing (each towel was finished by Jannie and she made some lovely, matching hangtags too).  Also, thanks are due to our staff who worked on this project--Scott, Kim, Aaron, Amy for their help in getting the loom prepped and keeping it running towards the end as our deadline approached.


Weaving 110 yards was an adventure, a fabulous learning experience and something that I wouldn't shy-away from doing again.  Thanks for following along! 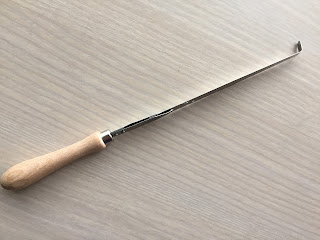 We are pleased to announce that we have new patent denters now in stock. Now offered in two sizes (10-14 dent and 15-20 dent), this updated version still makes sleying your reed a breeze as it travels from dent to dent as you work. To watch our video on how to use the patent denter, please click here.  This video features our old model of patent denter, however the technique is much the same.

These amazing tools have been added to our Holiday Sale here--be sure to enter the code 10OFFDEC for 10% off your eligible items at checkout!
Posted by Ashley at 11:44 AM